Edit
watch 01:36
We're Getting Mutants in the MCU - The Loop
Do you like this video?
Play Sound

The transcontinental channels are Grid Structures forming passages between continents. They are composed of a group of sims, usually covered with sea water. These channels sometimes have automated transportation vehicles (like a ferry).

Note: Nautilus and Satori are not linked together with a transcontinental channel. They form together a supercontinent, like Euroasia in real world. However, before the creation of Nautilus City, they were two separate continents, linked with a channel. 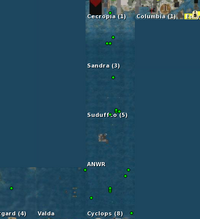 This channel connects Cercopia sim in Heterocera with Cyclops and Purple sims in Sansara. It consists of only 3 sims (Sandra, suduffco and ANWR). The ground is flat and has a sandy texture, with altitudes close to zero. There is an oil pipeline on the ground, connecting the two continents. On the surface, there are buoy marks. Also, there is an oil platform in the center of ANWR sim. This platform is a good place to rest.

In Cercopia, travelers can go by water, by road or by railway to almost every part of Heterocera. In Sansara, they can go by water. The GSLR railway allows a deeper enter into the continent.

Ship traffic is very intense, more then at every other transcontinental channel. A ferry travels accross the channel every 5 minutes, connecting Purple docks with Cercopia, the main port of Calleta city. There is also another outomated ferry that connects Bay City in Sansara with Tuliptree sim in Heterocera. Other automated vehicles, like the Yava Script Pods and SLGI Trains can be often seen.

Except for the automated transportation, personal boats and ships can be seen from time to time on the channel. Even more, since this place is low lag, people come here to the ocean floor to edit their outfits and sometimes to chat. 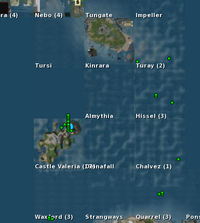 This channel has no official name, but it is located near Castle Valeria infohub. It is the second transcontinental channel in importance. It connects Nautilus with Corsica. Land is called Protected Ocean. It doesn't connect two well-defined points on the two continents. On both ends, there are many flooded sims and not two important ports to receive incoming traffic. In Nautilus, there is road access from nearby sim Tyranus, but without a large port. Since Nautilus doesn't have a complete continental road system, most travelers should continue their jurney by water. In Corsica, road access is far from the channel.

Ground is not smooth, full with slopes and sometimes water is not very deep. So, sailors must watch out for shallow sandy waters.

Basically, the sims composing the channel are: Castle Valeria, Deinafall, Chalvez, Hissel, Almythia, Tursi, Kinrara and turay. The channel is 3 sims long and two-to-three sims wide. Of high importance is Castle Valeria sim, with its massive castle, on a rocky island. The castle also hosts an infohub. It is placed in such a way that it guards access in Nautilus.

Traffic is intense. This channel is the second in traffic, after the ANWR. The main difference is that here automated transportation is represented only by Yava Script Pods en route to North Nautilus. No other transport company was detected on this waterway. More often, presonal boats and ships travel accross the channel. Some residents prefer to walk, fly or swim along the channel, while other use its low-lag to customize their outfits. 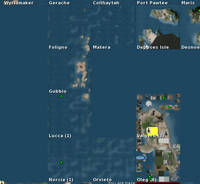 At some moment, a new connection was built between Corsica and Nautilus. Since land is named Sunrise Islands Waterway, this must be its official name. Like Castle Valeria channel, it doesn't link two specific sims of both continents. It connects two large groups of sims, covered with navigable water. There are not two large ports at its end, but two seas with many islands.

Construction of this new channel improved navigation between Gaeta 5 and Satori. The previos route, through Castle Valeria, was longer and not well-marked. In many places, it went through parcels of Land With Restricted Access. Now, it is much easier to sail long distances.

The channel is made of the following sims: Lucca, Gubbio and Foligno. In all 3, but mainly in gubbio, there are islands where you can rest, with palm trees and beach buildings. Ground is not smooth but usually in all places water is deep enough for large ships. Ground texture is sand, with many water plants. Traffic is not intense. Our team spotted no automated boats or ships (but automated transportation might still exist). Occasional boats and ships can be seen from time to time along the way. And even for people who are not attracted of sailing, a piece of relaxation on the Gubbio islands worth the effort of visiting this place. Land allows objects entry inside the channel. The only problem is that, inside Nautilus, an automated vehicle cannot go too far, because land restrictions don't allow access.

With no official name, this channel connects Corsica and Gaeta 5. It is the longest of all transcontinental channels. One of its features is that this is a place where you can see only ocean and no piece of land and still not worry about sim borders in direct contact with intersim void. In Corsica, near the end of the channel there is a large port in Danshire (and a lot of other smaller ports around in nearby sims). However, there is no direct connection between a port and Corsica road network. In Gaeta 5, the road ends in Squall, at the beach, in a rezz zone. Additional small ports exist along the coast of Gaeta 5.

The channel is composed of the following sims: Unsurt, Genrin, Coriandimo, Jetika, Murport and Landark. It is 3 sims long and 2 sims wide. It can be considered 7 sims long if we think about the total distance between dryland on both continents. Ground texture is a dirty sand. It is not flat, there are small slopes that are no threat for navigation. There can be found a buoy from place to place, guiding ships.

Even if this channel is large in size and visible on all maps, traffic is not intense. There are not many people around not many ships. It is a place for lonely people. Unfortunately, there are land restrictions. All sims that form the waterway don't allow objects entry. As a direct result, no automated vehicle can go accross the channel, even if this is required by some people in the area. 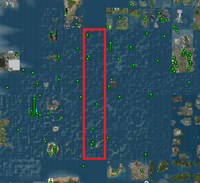 Sims and places named 'Blake Sea' can be found both East and West of the channel, but from a strict Geographic point of view, this channel is the separation line between continents.

This channel has no automated transportation, because land does not allow objects entry. As a direct result, no transport company has vehicles on this route. 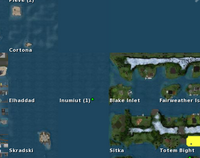 Created somewhere in autumn or winter 2014, this is the shortest of all channels. At that area, only one blank sim is separating Nautilus from Blake Sea. The connection was made when Inuminut sim was created. The main, large Southern passage was large enough for any ship, but did not allow automated vehicles to pass. The new, tiny passage, allows a fast access to Northern regions of Blake Sea. Also, it allows automated vehicles to pass. inuminut is a Linden-owned sim, with the status of a coastal waterway, so everybody is welcome here. It hosts no islands. Both to East and West, it is connected to long waterways. 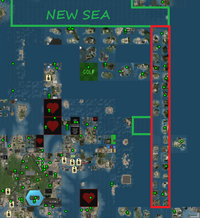 Inaugurated on August 27th 2014, it is the first channel built of private initiative, Seychelles Channel connects Corsica with Nautilus. It is the longest of all channels (10 sims) and the most surprising. To North, it reaches coastal waterways of Corsica, very close to Edge Walker sim, a place where the road is very close to water, so that it is possible to reach the road and get deeper inside the continent. In South, it ends in Seychelles Subcontinent, a private tropical paradise, with many waterways. From there, it is easy to get to Nautilus City and even to Satori.

Unlike all the others, land it has a straight of navigable, protected water, but it is surrounded by inhabited (or ready to sale) islands. One of the most surprising facts is that the islands along this channel are very high, maximum Altitude detected was 105 meters. they are mountains, covered with tropical vegetation. Still, there is a passage, wide enough even for Titanic, so that any ship can pass without problems. This is the most rational way to use a waterway found on any transcontinental channel.

From all 3 channels connecting Nautilus with Corsica, this one is very important because it is the ONLY one that allows access to Satori. Nautilus has massive navigation problems, because its Waterways are not connected, they are split into many remote seas. Until this construction, it was impossible for an automated vehicle to move from South to North Nautilus by any mean.

In April 2015, this transcontinental channel has further changed. New private-owned sims were added to North, while Linden-owned sims were also created in South of Corsica. Also, a small branch was created, as a shortcut to North-East Nautilus.

Coordinates are given in sims, like they are given at Gridsurvey: longitude (min-max)/ latitude (min-max). After coordinates, you can see the Grid Sector where the transcontinental channel is:

Community content is available under CC-BY-SA unless otherwise noted.
Advertisement